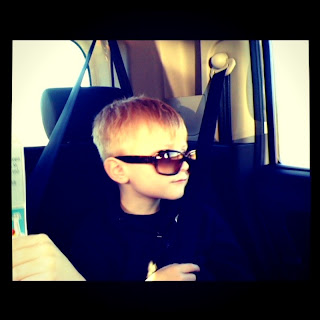 my little man is off to pre-k summer school tomorrow.  this will be his first time in a classroom and...

i do not feel ready for it.

i will be able to sleep tonight because: 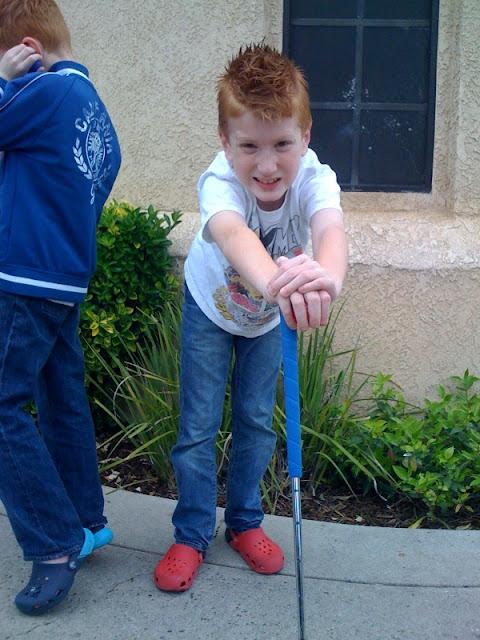 it has become necessary to record some recent notes about isaac.  why?
reason 1:  he seems to be undergoing some kind of personality-growth spurt.
reason 2:  he finally fell asleep tonight after shouting, "i hate this family!"  and it broke my heart a bit.
passionate declarations of all types are isaac-trademarks.  sometimes, the context is clear.  other times, like earlier today when he said,
"i cannot push people in holes!  in deep holes!"
it is less so. 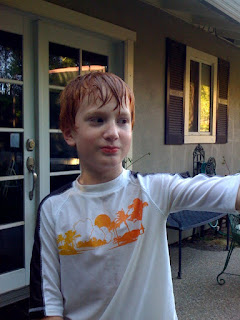 one thing is for certain.  he has strong feelings that intersect sharply with a flair for the dramatic.
also certain, his appearance on "inside the actor's studio" will be riveting.
although i enjoy most of isaac's performance moments, his leading-man roles are the funniest, and most endearing.
scene 1:  isaac takes my hand while riding in the car, nuzzles his face against my arm and says,
"i love having a crush on you."
scene 2:  isaac taps a tutor on the shoulder, and says,
"this little kangaroo is looking at you, holly."
holly:  "what little kangaroo?"
isaac smirks and hops up and down.  (seriously no idea where/how he came up with that...) 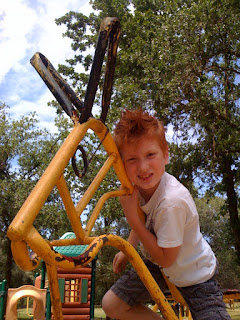 when not trying out pick-up lines, isaac likes to tell jokes and ask a lot of questions.
today's questions were tricky ones, like:
"what am i smelling right now?"
and
"why is that baby crying very far away from here?" 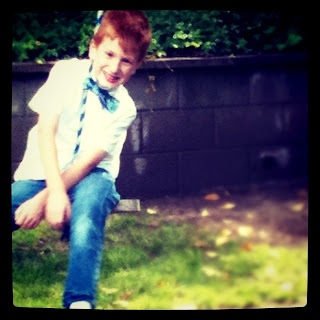 many of isaac's jokes are the result of accidents, or like a couple of weeks ago, serious questions...
isaac:  is soap disgusting?
me:  what?!?!  no!  soap is good!
isaac (unmoved):  well, it's disgusting when you eat it.
and, you know, that seemed inarguable.
also inarguable, i love having a crush on that kid. 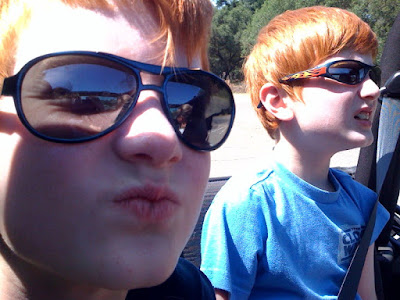 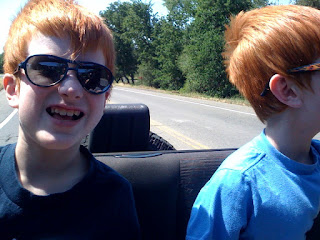 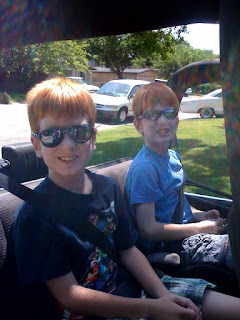 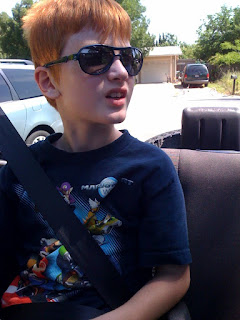 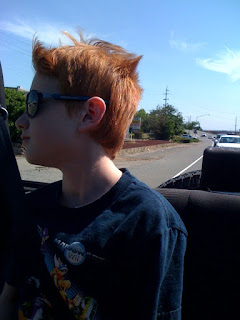 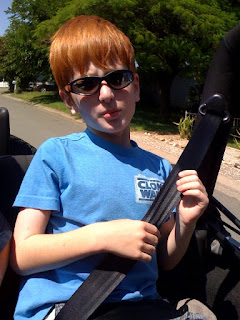 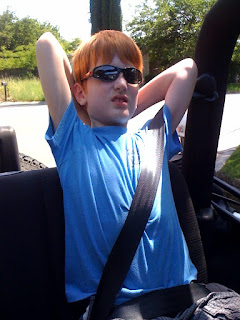 yesterday, auntie tia took us for our ride in her jeep, felix.  we couldn't fit lucas, so he stayed behind with oma.

the sun beat down.  the wind whipped our hair.  jacob asked to push the "close button" over and over again...

we got icees and drove back through loomis.

and i wanted summer to last forever.
Posted by Steph at 10:38 AM No comments:

you spin me round


as summer started to settle in today, we found ourselves:

listening to dead or alive.

making a gigantic mess in every room.

and having a water bottle fight with one squirt bottle filled with water, and one filled with method antibacterial bathroom cleaner...

essentially, a water fight for germaphobes.

also worth noting, jacob is breaking in his "sleep boots" as i type this.

he was fitted for night splints a little over a month ago in the hopes that we can reduce his toe-walking.  although, i'll miss his tippy-toe-prance, i know that this is the right thing for him.  and i'm crossing my fingers that he will have sweet, sweet dreams while his rainbow-foam and car-printed splints work their stretching magic.
Posted by Steph at 10:40 PM No comments:

ok.  technically, it is not summer.

but school is out.

the sun finally showed up. 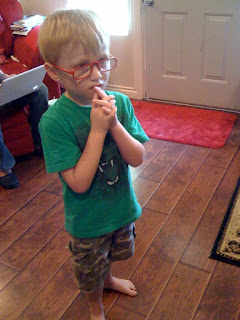 we're going to go ahead and call it.

today, to mark our first day of vacation, i made the "big, pink cake" that i promised jacob.

admittedly, it's lacking in aesthetics.  but it made up for its homeliness with handfuls of chocolate goodness (handfuls is accurate because lucas and i ignored our forks).
jacob sang a modified birthday song and cut the cake when i wasn't looking.  isaac ate his entire piece within seconds.  and lucas basically re-enacted his first birthday, including getting cake in his nose.
cake + kids + sun + free(ish) time = welcome, summer.
Posted by Steph at 10:46 PM No comments: 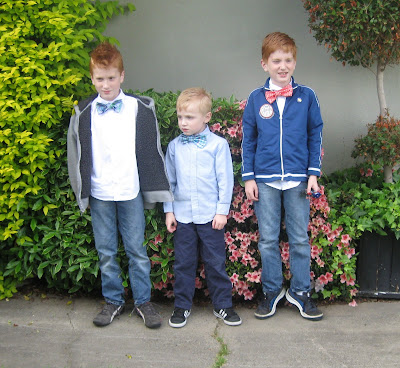 my three boys, Easter 2011
i cannot believe another Easter has come and gone.
in a lot of ways, Easter was more bittersweet this year.
luckily, the sweet parts were very sweet.
i decided to make a bow tie for each of the boys since isaac had been so disappointed
that only lucas got to wear one last year.
isaac specifically wanted his bow tie to be purple and yellow, as an homage to his
alter-ego super-villain, the shockaroo.
finding a purple/yellow fabric that wasn't terrible, was a little tricky, but i think i like what
we came up with. 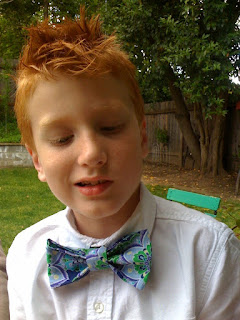 jacob wanted his bow tie to be red because that's his favorite color.
admittedly, the control freak within me wanted to veto that because it didn't seem Easter-y enough.
i got over it, though, and he kept his bow tie on until bed-time
and was disappointed when i had him take it off. 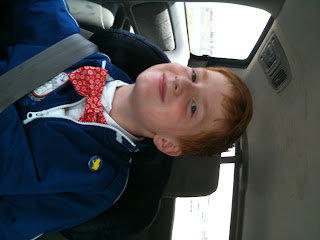 lucas didn't care that i made him a bow tie, or what color it was.
he did wear it, though, and that won him enough points that
he was able to get away with jumping on the trampoline for several minutes without
pants on.
we had to draw the line, however, when he removed his underwear and peed
(on the trampoline).
that kid is shameless.
(shhhhhh...i kind of love that about him.) 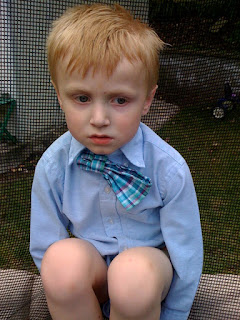 after our annual egg hunt at grandma and poppa's house,
we headed home to watch "tron" and make
Easter dinner.
i'm pretty sure that i won't remember much about the food.
but, i hope that when i think back,
and remember this Easter,
that i will remember feeling... 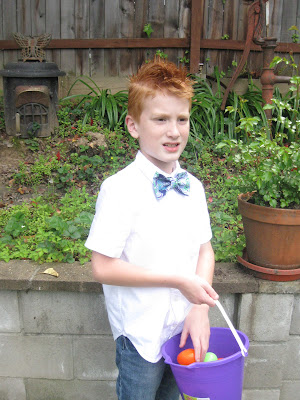 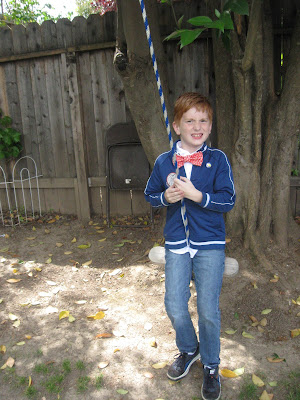 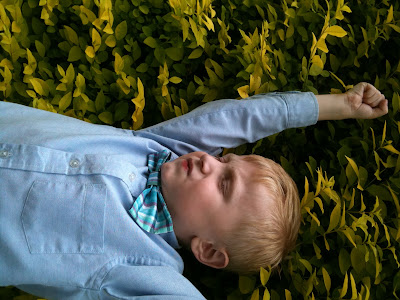 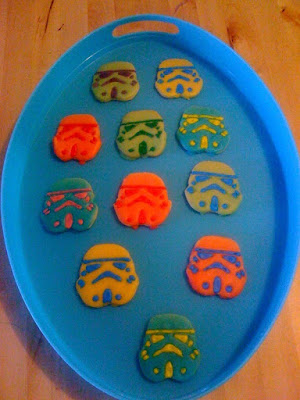 the first thing i heard when i opened isaac and jacob's door yesterday morning was,

and, though we have no actual plans involving cancun, we do have quite an agenda:

some of these will be easier to accomplish than others.  and one of them, we just completed yesterday.

(ragain and lucas have yet to submit their wishes.)
i feel relieved to have all 3 boys at home.  even though, we had a rough 45 minutes or so, last night.
it's 9:30 AM, and we're still in our pajamas.  we have an egg hunt this afternoon.  and we have blueberry coconut cheesecake bars in the fridge.
practically paradise.
Posted by Steph at 9:37 AM 4 comments: