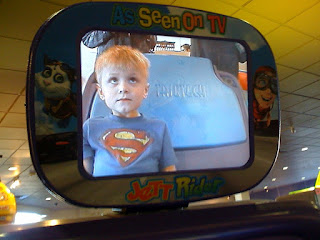 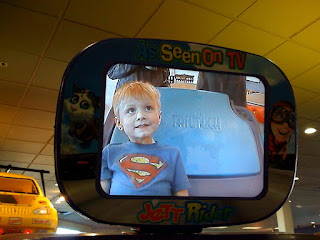 a larger than life lucas


my little lucas is 5 today. and i can hardly believe it.


to kick-off this momentous occasion, here's a quick sketch of the phenomenon that is, lucas.


before lucas had acquired much language, he would attempt to order chicken nuggets at any and all drive-thru windows using a long series of jabber. it usually worked.


ever since we can recall, lucas has had a passion for animals. anything having to do with animals. anything resembling or picturing an animal. he once tried to get me to buy a bag of wood chips because he thought the wood grain pictured on the package looked like zebra print.
he also argued with me once over whether or not a bird in a book was a penguin or a puffin, you would think that i could have won that one, having the ability to read and all, but he was somehow infinitely more persuasive.


lucas has offended numerous people by screaming "ouch!" when they tried to sing him a song. consequently, i'm fairly sure he can have a job as an american idol judge if the zoology profession doesn't pan out.


lucas is one of my favorite people to watch "the office" with. we like to re-enact our favorite scenes. we also enjoy "so you think you can dance" re-runs and might be found copying the choreography.


lucas pretty much has the ultimate sweet tooth. shunning nearly everything savory except for french fries and chicken nuggets. he won't eat goldfish, chips or popcorn, even though his brothers would happily make a meal of those three things. he will, however, eat his weight in fruit newtons, cookies, fruit snacks, graham crackers and raisin bread. we're doing a "new foods" program, but we have our work cut out for us.


if you ever come across lucas, you might realize that he has a magical power. it is the ability to make you hug and or kiss him whether you are that sort of person or not. i used to think it only worked on ragain and i and our moms...but then i noticed it happening to everyone who interacted with him. his tutors, o.t., my friends, and the twins' teachers and aides. mostly, if he smiles at you, you're gonna need to hug (and maybe kiss) him. my advice: don't fight it.


happy birthday, to a little boy who makes me and my heart smile every single day. love you, lukey.
Posted by Steph at 9:05 AM 2 comments: 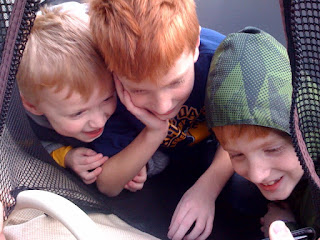 the twins went to school with heavily gelled hair and limited complaint. lucas has a bit of a cold, so we canceled his therapy session and let him (and his nose) run around in pajamas until late morning. even when under the weather, lucas is pretty easy to get along with. he's even easier to get along with while watching PBS kids, or in his estimation, "suicide kids".

somewhere in between "the cat in the hat knows a lot about that" and "dinosaur train", ragain and i managed to pack up all the rest of the Christmas remnants into the storage boxes. if we can get any credit for having done that before february, i would like to collect that now.

we ran some errands. we got our sick little man a giant root beer. we made it just in time to pick up isaac and jacob from their minimum day at school.

after some shuffling, and ragain leaving for work, all 3 boys and i met up with my mom to go to the park. usually, isaac and jacob would have therapy right after school, but we have a new tutoring schedule that frees up our monday afternoons. hurray.

we drove to one of our favorite parks and the boys ran around like wild animals. all of the sudden, lucas called out from the top of one of the play structures... he was peeing. all over. and, i do mean, everywhere. i was stunned. my mom was stunned. lucas looked kind of surprised, himself. then, he was like, ew. and, let's just take these pants off. i scrambled up the play structure and tried to pull him over to the car. now, he's mad. he doesn't want to leave. he just wants to frolic around with no pants on.

of course, i have no spare clothes. in fact, ragain and i just bragged about how lucas never has had many "accidents". note: bragging might = chumps.

my makeshift solution: his sweatshirt becomes booster seat cover. pants, underwear, socks and shoes go into an empty bag. wipes substitute as full shower. cotton re-usable bag becomes loincloth. bribes include phone apps and fruit snacks. after my lesson in resourcefulness, i sat in the car staring out at my other two boys still playing and feeling sort of dazed.

after the twins are semi-exhausted, we make a quick milkshake run to mcdonald's and i consider trying to pretend that there's nothing weird about my half-naked child in the backseat. considering it gives me a headache.

back home. we conquer homework after an hour and a half of diligence. it is somehow time to get ready for bed. we do some reading. we watch the swedish chef on youtube. (it only gets funnier.) clip nails. take vitamins. brush teeth. compromise on bedtime story. answer a million questions about bedtime story. prayers, water and chapstick.

i let lucas watch NOVA as a visual nightcap while i take a timeout in my room. and during my timeout, he put himself to bed. and i missed it. that final sweet moment of the day. so, i kiss his forehead and settle in next to his sniffly little body, wearing mismatched pajamas and his bright green crocs.

"the cape" is over. and i'm looking forward to tomorrow. good night.
Posted by Steph at 10:53 PM 1 comment: 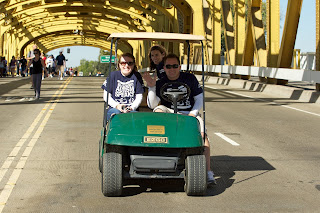 i don't know about you, but 2011 seems like it has the potential to be awesome. i hope i won't have jinxed it just by saying that. here are some things that lead me to believe that this is my kind of year...

1. the first week of january, i cleaned out my closet. you can't fully appreciate that without having seen my closet, but have you ever had something explode in a microwave? yep. pretty close.

2. we already filed our taxes.

4. i got unlimited text. does that explain why i might be texting you all the time for no good reason? partly.

5. i've taken all 3 boys to the grocery store by myself, twice! once in the dark! and i remembered my reusable bags both times! **note: i didn't lose anyone. nobody ran more than an arm's length from me. i was not suckered into buying any dvd's. this is PROGRESS.**

6. i made one colossal Sunday dinner consisting of 2 roasted chickens, mashed potatoes, rolls, and steamed zucchini. bonus: 2 pumpkin pies for dessert. (i imagine you clapping at this point.)

7. my mom, the tutors, and i took the boys to chuck e. cheese for the school fundraiser night. it went remarkably smoothly. i only had to sternly reprimand one child...and it wasn't my child. the boys and i all played air hockey (my favorite!) and i think we might need to get our own table (yes!). thank you, mom and tutors!

8. i feel luckier and more grateful for the people in my life.

9. january is the birthmonth for some of my favorite people: my mom, my aunt sharon, my sweet lucas (5! next week!) and also, my dear friend, k. which brings me to...