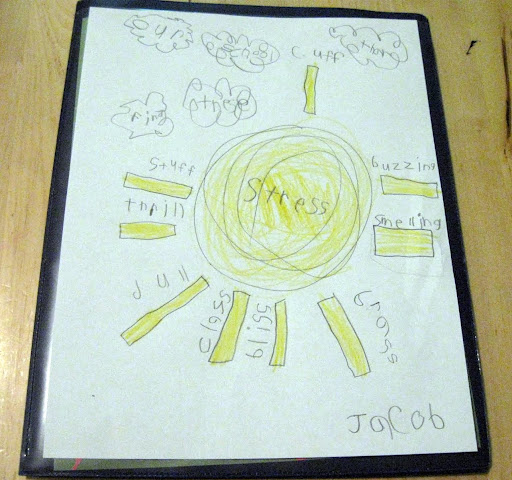 we're midway through the week before thanksgiving. the twins have minimum days all week this week because of parent-teacher conferences.

can i be honest? the thought of sitting down with the teachers and the boys is slightly terrifying to me. i feel disproportionately anxious about it. mostly, when i have to go to the school, i feel like a raw nerve. i feel exposed and emotional... easily hurt or angered. i feel like the teachers are always about to deliver bad news, the other parents are going to judge our family or say something insensitive, the other kids in the class are going to ask us a lot of questions about why the boys do the things that they do.

and it will hurt. all of it.

and i will react badly. and say something harsh. or, sometimes worse, i won't say anything. and it will get the best of me. and i won't enjoy spending time with my boys at their school. and marvel at their progress. enjoy their expanding independence. or mirror their enjoyment.

it seems like after all this time in the mainstream classrooms, i should feel a little more at ease, but i still feel like a visitor. like we're just pretending to belong there. and that feels like a huge weakness. and i have to overcome it because it is a luxury that i cannot afford.

so, in the spirit of thanksgiving, i will say that i am thankful that everything changes. that while all these past days i have been a coward, crying in my car after someone says something lame to me--- my boys have been going to their classes and smiling at their teachers, aides and classmates. and i can learn to smile, too. and risk the hurts. because everything changes. and tomorrow, there might be fewer hurts and the sting of those hurts might be less and less until it doesn't even register a flinch.
Posted by Steph at 9:12 PM 1 comment:

Labels: jacob, school, the bright side

in keeping with our grand halloween traditions of dreaming big and then, procrastinating, i give you halloween 2010

months ago, isaac told us that he wanted to be killer moth from the lego batman wii game. i had to give him some serious points for creativity and a willingness to appear completely random. he also mentioned that he wanted to look like a lego minifigure... our visions might have diverged a little on this point, but we attempted a compromise.

meanwhile, jacob gave us a sketch of a skeleton costume, complete with hood and cape. fully aware that there are a million skeleton costumes in the world, i decided that i would still make one completely from scratch (enter grand domesticity delusion). i clung to that idea until we were less than a week from halloween and i still hadn't produced a costume and jacob had seen one at target and stood in front of it, saying rapturously, "it looks just like him." we conceded and bought him the costume, but replaced the ugly rubber mask with a paper mache skull.

lucas couldn't seem to care less about costumes in general, and had given us no real idea what he might want to be. for several weeks, we insisted that we were going to make him an orca costume. we sketched it. we debated its finer points. we acquired some felt. we gave up with 2 days to spare. (sorry, lucas!) the little man seemed more than happy with his storebought costume and adhesive moustache (parental guilt mildly dulled). 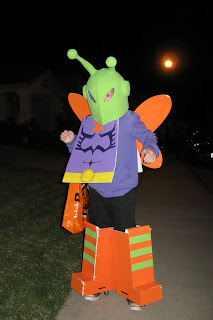 isaac as lego killer moth: at most doors, he was addressed as "alien" at which point
he would say, "i'm killer moth, and i'm here to throw in." 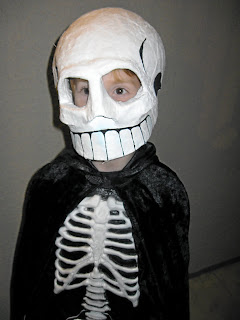 jacob as a semi-spooky skeleton. his grin was meant to make him seem friendlier, but from a distance and in most photos. the teeth look like stitches-- like his mouth is sewn closed. the spookiness was further enhanced by his deep and scratchy sounding "trick or treat". 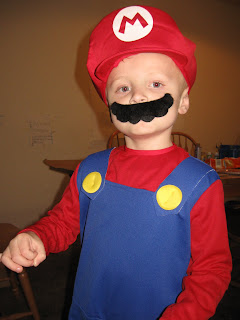 lucas as mario. he surprised us by repeatedly posing with one arm and leg up (a la mario) and keeping his sticky moustache on. like many moustache devotees, he actually seemed preoccupied with straightening, smoothing and grooming it.

in spite of the multiple revisions and costume delays, our halloween was pretty awesome. all three boys loved trick or treating. they were pretty reliable about saying "thank you" and "happy halloween". and, as a bonus, they haven't inquired once about where their halloween candy disappeared to...